Along with the Flesh-Twisters of Krüll and Boo-Ha-Ha Klan Goblins, The Iron Wolves are one of my “main armies”. In fact, they’re one of the most beloved forces on my shelves.

Their saga began shortly after the Flesh-Twisters’ finished. After finishing an army of evil vikings, it seemed only reasonable that the next project would be “good” vikings. Well, “good” in the loosest sense.

The idea of hulking great brutes in beaten metal armour trudging through snow is too evocative to resist. I began with the idea of creating a so-called “Logan-Wing” army, that is a force of Space Wolves Wolf Guard led by the special character Logan Grimnar (in that edition, taking Logan as the leader of your force allowed you to count the super-elite Wolf Guard Terminators as basic troops). This small, elite force gave me the opportunity to really lavish detail and attention onto every model (there were originally only 12 models in the whole army!) and give them each individual background stories, just like Space Wolves should have!

The colour scheme, obviously odd for Space Wolves, is my rebellious attempt at avoiding the default baby-blue that everyone else painted. I just found it an off-putting and inglorious colour, and so instead looked for a way around it. Inspired by this army, I took to work on making super dark and super gritty Space Wolves.

The Iron Wolves are a “historic” army, in the sense that they represent Iron Wolf Lord Ránnulfr at the height of power sometime in the forgotten past, well before Logan Grimnar took reigns as Great Wolf. As such, Ránnulfr counts-as Logan in game.

I used a mixture of Chaos parts, Forgeworld parts and normal Space Wolves bits and painted them in heavily washed Boltgun Metal. In fact, every part of these guys was heavily washed (perhaps too heavily) to create near black shades and brutal battle damage. These guys aren’t gonna be sitting at home polishing their armour, after all, their going to be out there, beating in the heads of giant monsters.

So unleash the Wolves of War!

Because the Iron Wolves are a bit of a special case (with almost every model having its own name and back-story), I thought, in-lieu of posting a collage, I’d post each photo individually along with their respective Saga. Enjoy!

Ránnulfr Called the Tribebreaker
Long before the time of Logan Grimnar, Ránnulfr called the Tribebreaker was favoured among the twelve Wolf Lords to be the next Great Wolf. A bloodythirsty and violent Wolf lord, Ránnulfr was the most feared Wolf Lord to have ever taken the World Wolf as his company’s sigil. A long running rumour among the company is that Ránnulfr lost his compassion for humanity when more than half his body was replaced with cold iron.

Ørnstein Dragonslayer
Thought lost when a great chasm opened up beneath him, Ørnstein returned to The Fang months later bearing the multiple skulls of monsters. Ørnstein claimed that he had been eaten by the World Wolf itself and forced to do battle with the giant creatures that hide beneath the ice of Fenris. His shamanic powers were put to great test, but with the World Wolf’s favour, he emerged victorious.

Hallbjörn Warsong
He who calls the winds forth and with them his howling brothers. They fight and rip, tearing into the enemies of the Russ. Warsong breathes fire, roars thunder.

Ingjalder The Blooded
Ingjalder served faithfully by the side of Ránnulfr as he plundered and destroyed his enemies. At the head of his pack, Ingjalder caused great devastation, tearing down tanks and fortifications alike. During a campaign that saw the arrival of Dark Angels on a hunt for the fallen, Ingjalder’s pack was caught in plasma crossfire and was completely wiped out. Ingjalder painted his armour blood red, inscribed the names of his fallen comrades on melta bombs and weapons and set out to find a glorious death against monstrous creatures and Sons of the Lion.
Brutus and Gnarshuk
Ingjalder’s only mortal companions, the two Fenrisian wolves Brutus and Gnarshuk have become mascots of the company. While Brutus is loyal and heroic, Gnarshuk is vicious and wild. The two wolves never leave the side of their master.

Olov Bloodiedclaw
Olov is the longest serving member of the Iron Wolves Wolf Guard. His favoured Wolf Claws are never far from him. He believes that through these weapons he can summon the ferocity of Morkai and slaughter enemies in his name.
Gudbrand Flamebearer
Once a great smith, Gudbrand favours the holy burst of Plasma weapons. He is a constant worry to his companions as his fervour for melting things is slowly growing out of control.
Isak Steeleater
A young member of the Wolf Guard, Isak is famed throughout the Fang for his ability to chew through metal. As such, he is assigned a Chainfist, all the better to tear apart enemy armour.
Randulfr Siegemaster
Called the Siegemaster for his ability to quickly break the backs of any foe. With his antiquated Storm Shield and Power Axe, Rangulfr always cuts a striking visage as he lops heads off this way and that.
Greger Longreach
Fiercely loyal and protective over his younger brothers, Greger plows down his foes with a rune-emblazoned Assault Cannon. He has been nicknamed ‘The Sweeper’ for his brutal volleys of fire, and also for his almost  fatherly qualities.

Bjorn Wildcall
Almost as animalistic as Gnarshuk, Bjorn never sleeps under a roof, favouring the strengthening winds of the outdoors. Bjorn and Olov have an enduring rivalry, a friendly competition that began with Olov drinking the entirety of Bjorn’s plundered mead.
Folkvar Foehammer
A notorious tank hunter, Folkvar is never happy until he is charging headlong into an occupied building or rumbling tank. He wears a muzzle in battle for fear that his canine instincts will one day cause him to harm his brothers.
Agni Sharpblade
Agni has been called ‘The Spurned Knight’ for his obsession with chivalry and honour. The other members of his pack constantly berate him over his choice of knightly weapons and totems that he favours over pelts and claws.
Gulltoppr The Young
The youngest member of the Guard, Gulltroppr is claimed to be ‘Touched by the Sun’ for his bright yellow mane. He is feared for his reckless abandon in swinging his Thunder Hammer.
Anvindr Stormwrath
Most tech smart of his battle brothers, Anvindr is the mortal representation of the storm. His missile launcher is an invaluable tool for the Wolf Guard, and has slain uncountable foes.

Torbjörn The Ironforger
Under the tutelage of Ránnulfr, Torbjörn became the company’s greatest smith and protector. Torbjörn sailed to the Iron Islands to teach new Iron Priests his inherited skills. When Ránnulfr was almost killed in a failed armoured assault, Torbjörn oversaw the rebuilding of his body. Since then, Torbjörn has held an honoured place in Ránnulfr’s Wolf Guard, guiding younger brothers on the path of steel.
Agmundr Brightblade
A personal friend of Torbjörn since even before they were elevated to rank of Grey Hunter, Agmundr has fought by Torbjörn’s side for hundreds of battles. He was involved in the operation to return Ránnulfr’s broken body to the Island Islands, fending off ravenous creatures of the deep as Torbjörn tended to his wounds.
Oddmund the Reviled
Not much can be said about Oddmund the Reviled, as he rarely speaks. There is a rumour among the guard that the ugly Oddmund is just as happy eating human flesh and drinking blood as the others are eating elk and drinking mead. 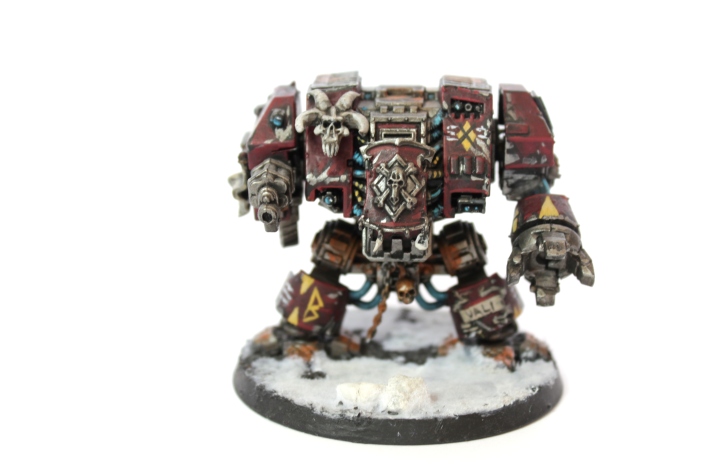 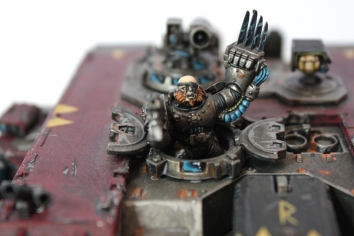 Leaf, Commander of The Prowling Mountain

I still had a rather wolfish itch after completing The Wolf Guard of Ránnulfr (perhaps it was fleas), and so I set out to add some more long-fanged brutes to the army. Along with the force below, I also put together 20 Grey Hunters that, unfortunately, never seemed to have found paint.

But anywho, the extra Wolves below are members of the same Great Company, following Ránnulfr through the cosmic wilds. They were painted after the main force of Wolf Guard Terminators. 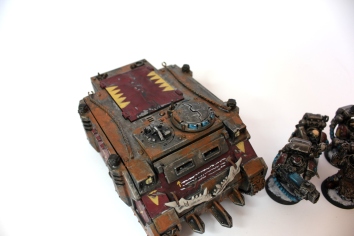 Leman Russ himself! At least, the really-retro version of the Primarch 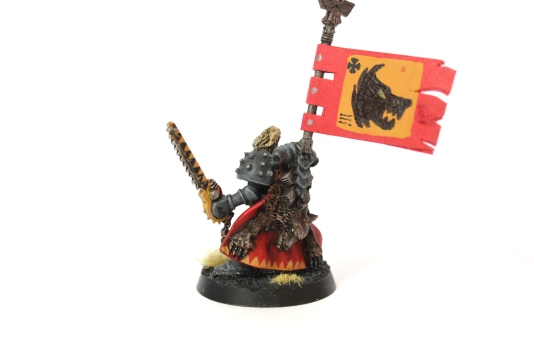 Among the Iron Wolves, he is known as Rendall Grimrock

This web site is completely unofficial and in no way endorsed by Games Workshop Limited. Header Photo: "The Emperor Sits on His Golden Throne" by John Blanche, 1987. Various properties and devices used for artistic purpose without intent to profit. Used without permission. All Rights Reserved to their respective owners.